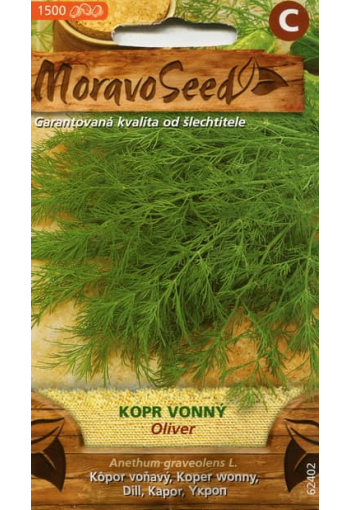 Add to wishlist Add to compare
DescriptionReviews (0)
Bush dill "Oliver".
Mid-early bush-type variety of Czech selection with a growing season of 68-78 days.
It is intended for cleaning greens. It has a very large juicy leaf of light green colour. It does not throw out the flower arrow for a long time, which allows you to repeatedly cut the greens.
This variety is suitable for growing both in open ground and for an early harvest in a film greenhouse, which reduces the growing season to 42-50 days.
Agricultural technology.
Dill is a cold-resistant, light-loving plant that prefers fertile, moist areas. Dill seeds are sown on prepared soil without incorporation but with mandatory 2-3 cm peat mulching. Seedlings appear on the 10-15th day.
Care of crops consists in loosening row spacing, watering and top dressing. To obtain earlier greenery from open ground, dill is sown before winter, on frozen soil (in the second decade of November), and covered with 2-3 cm of peat. 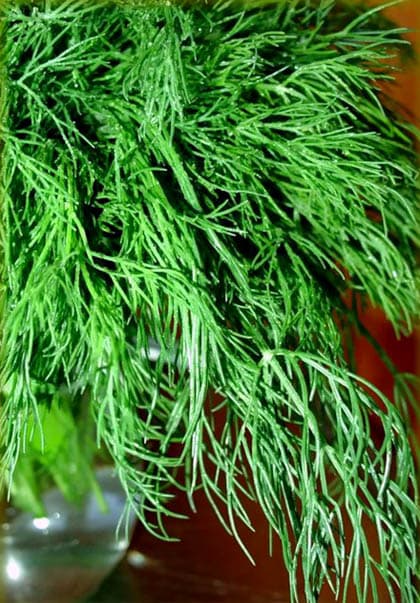 * Bush varieties in the axils of the leaves form side shoots, so the plant looks like a whole bush. However, all the typical characteristics of plants of bush varieties can be shown only under one important condition - a large feeding area.
Bush dill is distinguished by a high yield of greenery and its aromaticity, it does not go on to flowering for a long time, which increases the duration of the economic shelf life phase. And this makes it possible to make a big profit: greens from the bushes can be plucked for about 1.5 months, saving on the seed.
At normal plant density, lateral shoots do not grow in bush varieties, although even under these conditions they form a stem later than in ordinary varieties. That is why, when sowing such varieties, the row spacing should be 20-30 cm, and the distance between plants in the row after thinning (removed plants are used for greenery) should be 15-20 cm. With this sowing scheme, dill begins to form a peduncle only by mid-July.