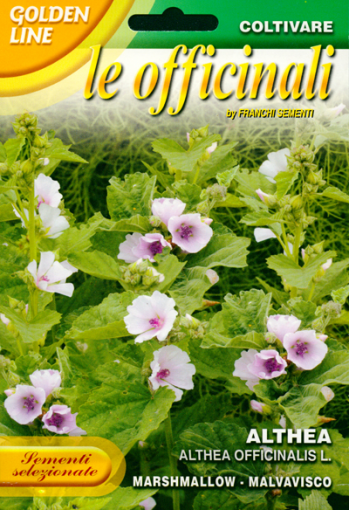 Add to wishlist Add to compare
DescriptionReviews (0)
Marshmallow "Healer" (mortification root) - Althaea officinalis.
It is used as a mild expectorant (especially in children's practice), an anti-inflammatory agent for acute and chronic diseases of the respiratory tract, gastric ulcer and duodenal ulcer.
Marshmallow herb contains 35% mucus, starch, pectin, minerals. The high content of mucous substances allows the preparations of marshmallow to cover the mucous membranes of the body with a protective layer for a long time, protecting them from further damage, while facilitating the spontaneous regeneration of damaged tissues, and reducing the inflammatory process.
Marshmallow has an expectorant, analgesic, antitussive effect. In medicine, teas are used from flowers, leaves and roots of marshmallow. 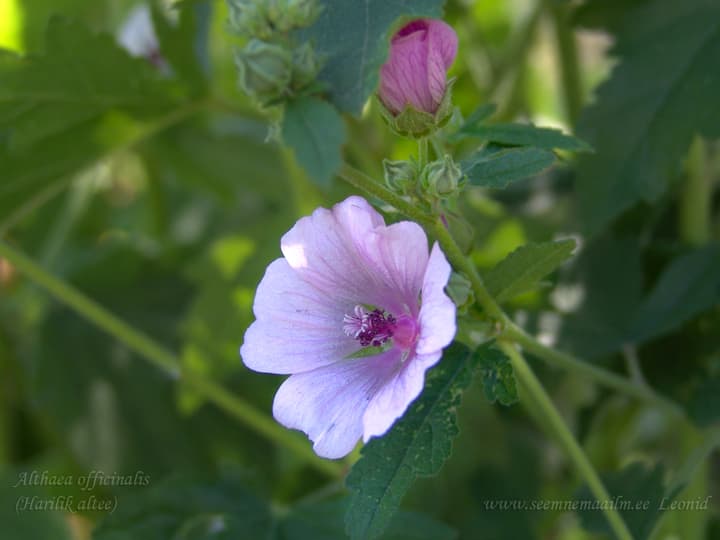 It is used as a mild expectorant (especially in children's practice), an anti-inflammatory agent for acute and chronic diseases of the respiratory tract, peptic ulcer of the stomach and duodenum. Marshmallow grass contains 35% mucus, starch, pectin and minerals. The high content of mucous substances allows marshmallow preparations to cover the mucous membranes of the body with a protective layer for a long time, protecting them from further damage, while facilitating the spontaneous regeneration of damaged tissues, and reducing the inflammatory process. Althea has an expectorant, analgesic, antitussive effect. In medicine, teas from the flowers, leaves and roots of Althea are used.
Agricultural technology.
Seeds are sown in autumn on seedling beds or in February-March for seedlings. Seeds require preliminary stratification: sow seeds to a depth of no more than 0.5 cm, moisten from a spray bottle, cover with glass and place in a refrigerator (temperature + 5 + 7 ° C). Crops are kept under such conditions for 10-15 days, then transferred to room conditions. It is necessary to monitor the humidity of crops and ventilation. At a temperature of + 18 + 20 ° C, shoots appear on the 10-14th day. If there is no germination, repeat the "cold-heat" method in the same sequence. Seedlings dive into boxes in the phase of 2-3 true leaves. Seedlings are planted in the open ground after 4-6 weeks. Prefers sunny places or light partial shade with loose, non-acidic soil. In one place it can grow for 5-7 years. 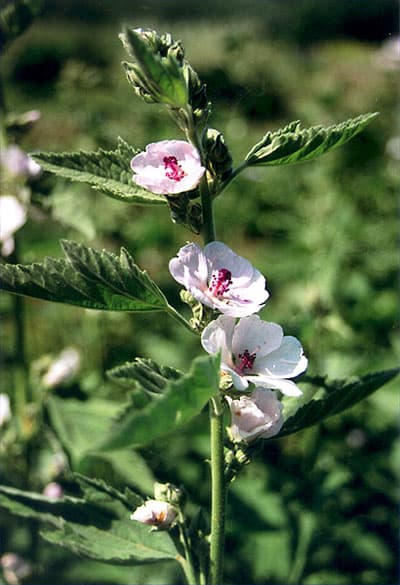 How to grow Althaea officinalis in garden?
Marshmallow officinalis is usually propagated by seeds, much less often by segments of roots with buds or seedlings.
The best for its cultivation are fertile soils, light or medium in their mechanical composition. For sowing marshmallow seeds, the soil must be prepared in the fall.
To do this, immediately after harvesting the predecessor, it must be loosened with a rake to provoke the germination of weed seeds, and after two weeks, dig up to a depth of at least 25 cm.
Before digging, it is necessary to add well-rotted manure, 1 bucket each, superphosphate and potassium salts, 1 tbsp each. spoon per 1 sq.m.
If the soil is heavy, then it is additionally necessary to add 1 bucket of coarse-grained river sand and low-lying ventilated peat, and in spring - 1 teaspoon of ammonium nitrate.
It is necessary to sow marshmallow seeds immediately after the site is freed from snow and the soil dries up or before winter when there are no conditions for germination. Althea seeds must be soaked before spring sowing. To do this, they must be put on a cloth moistened with water and kept moist until the seeds swell, but not less than three days. Seeds in the garden are sown in rows with a distance between them of 40-50 cm, the distance between plants in a row is 8-10 cm, planting them in the soil to a depth of 2 cm. weed herbs. Therefore, at this time, the bed must be kept in a loose and weed-free state.
Care of crops consists of the fight against weeds, loosening the soil between rows and thinning plants with thickened shoots.
Althea roots are usually harvested in the second year in the fall after the aerial parts of the plants die off. The roots are carefully dug out without damaging them. They cut off the above-ground part of the plants, shake them off the ground and wash them quickly (no more than 15 minutes) in cold running water, preventing them from mucus. After washing, lignified and rotten parts are removed. Then the roots are cut into pieces no longer than 15-20 cm long, and the thick roots are cut lengthwise.
It is necessary to dry the roots in the shade under a canopy or in an oven at a temperature not higher than + 45 + 55 ° С. The roots are considered dry when, when bent, they do not bend, but break with a crash. Althea root very quickly absorbs moisture from the air. Therefore, at home, it is better to store it in a jar with a tightly closed lid in a cool place. When stored under such conditions, dry marshmallow roots retain their medicinal properties for three years.
Used parts: Roots, leaves, flowers.
Pharmacy name: marshmallow root - Althaeae radix (formerly: Radix Althaeae), marshmallow leaves - Althaeae folium (formerly: Folia Althaeae), marshmallow flowers - Althaeae flos (formerly: Flores Althaeae).
Collection and preparation.
To get perfect raw materials, you need to dry the freshly harvested roots very quickly. This can be done outdoors or under artificial heating. If the raw roots lie for a long time or the drying process is delayed, saprophyte fungi settle on the roots very quickly, which begin to destroy plant tissues. The raw material devalued in this way becomes stained and acquires a musty smell. The leaves and flowers are picked young and quickly dried in the shade.
active ingredients.
The basis is a high content (up to 35%) of mucus. In addition, marshmallow has starch, sucrose and pectin; the abundance of minerals is also important. The leaves and flowers contain less mucus, but there is some essential oil.
Healing action and application.
Marshmallow has been known as a medicinal plant since ancient times. Interestingly, its medical use has remained virtually unchanged over the past centuries. Mucus relieves irritation during inflammatory processes inside the body (in the stomach and intestines), as well as on the skin and mucous membranes of the mouth and throat. Drugs containing mucus have justified themselves as a cough remedy, relieving irritation and facilitating sputum discharge. As a result, marshmallow root tea is successfully used for pain in the stomach and intestines, as well as for diarrhoea.
Marshmallow tea sweetened with honey is a good cough remedy, it alleviates attacks of asthma, pneumoconiosis and emphysema. Gargling with marshmallow tea improves the condition of the gums, as well as the mucous membrane of the mouth and throat when they become inflamed. The effectiveness of marshmallow, both root and leaves, is also recognized by the German National Health Service.