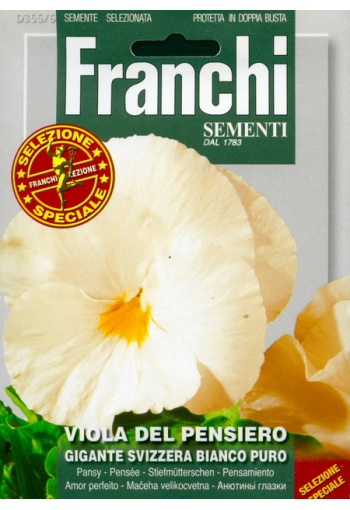 Add to wishlist Add to compare
DescriptionReviews (0)
Pansies "Gigante Svizzera Bianco Puro" - Viola x wittrockiana.
Delightful large-flowered pansy is a decoration of a balcony or any garden space.
Blooms profusely and continuously from May to September. Flowers with a small yellow spot in the center, 6-7 cm in diameter. Plant height 15 cm.
The plant is moisture-loving, cold-resistant, grows well in the sun and in partial shade.
To obtain plants that bloom in the year of sowing, seeds are sown for seedlings in February-March. Seedlings appear in 5-7 days. Seedlings are planted in open ground in late April-early May at a distance of 20 cm. The transplant is well tolerated in a flowering state. When sown outdoors in June-July, flowering occurs in the second year.
They are used for planting in flower beds, balcony boxes and garden vases.

* Pansies are winter-hardy and fairly shade-tolerant culture. However, when grown in partial shade, their flowering, although longer, is less abundant; flowers are smaller, not so bright. This plant prefers fertile and moist loams. On poor, dry, sandy soils, viola flowers quickly become smaller, which is especially evident in large-flowered varieties. Also, you should not plant pansies in lowlands, where melt water stagnates, as this leads to damping and death of plants.
For good development, it is recommended to regularly water the in dry times, as well as feed them with complex mineral fertilizers containing nitrogen, potassium, phosphorus and trace elements. It is useful to fertilize seedlings with ammonium nitrate and superphosphate (20-40 g per 1 sq. M). Keep in mind that pansies cannot tolerate fresh manure.
Prolongs flowering of pansies timely removal of faded flowers, which delays the development of seed pods - otherwise, when the seeds ripen, the plant stops flowering, and then flower quickly dies off (it stands as a dry, lifeless bush).
Pansies are propagated in different ways, but the main ones are seed propagation and cuttings. Sowing seeds, depending on the planned flowering time, is carried out at different times. To obtain abundant flowering from early spring, viola is sown in the summer of the previous year, around the end of June - early July. To grow compact seedlings, the seeds of pansies are sown sparsely in rows in nurseries or on well-worked ridges; seedlings appear in 6-14 days. 2-3 weeks after germination, the pansies dive, and at the end of August they are transplanted to a permanent place (where you want to see violets blooming next year) at a distance of 20-25 cm between the plants.
Sowing pansies in summer is carried out in such a way that the plants have time to develop well before the onset of the autumn cold, but do not bloom.
To obtain flowering plants in one year, seeds of pansy  are sown on seedlings in February. Sowing is carried out in a room or greenhouse, preparing boxes or pots with loose, moist, fertile soil. Seeds of pansies are rarely spread over the surface of the substrate, lightly sprinkled on top with a thin layer of earth and put the container in a dark place. Pansies emerge in 8-15 days at a temperature of + 15 + 20 ° C and sufficient soil moisture (at temperatures above + 25 ° C and insufficient substrate moisture, seedlings do not appear). After the appearance of the first shoots, the temperature is immediately reduced to + 10 ° C and the plants are placed in sunlight, and after 10-20 days, the viola shoots dive. Grown up pansies, intended for summer flowering, are planted in a permanent place in early May.
Vegetative propagation method for pansy - cuttings in the open field. This method is simple, economical and quite effective; it allows you to get a lot of planting material. Violets are cut by cuttings in May-June: the final green shoots with 2-3 nodes are cut from the bushes. Cuttings are planted in a shaded place tightly to each other to a depth of no more than 0.5 cm; after planting, the cuttings are watered and sprayed with water. After about 3-4 weeks, the cuttings of the violets develop roots. With early cuttings, pansies that have grown from cuttings bloom in summer or early autumn, and with later summer cuttings - in the spring of next year.
Reproduction of violets by cuttings rejuvenates the plants, does not allow the bushes to grow strongly to the detriment of flowering. From one well-developed plant in one step, you can get about 10 cuttings, and over the summer - 30-45 pieces.
Pansies are widely used for flower decoration. They are planted as a curb plant, planted in balcony boxes, street vases, prefabricated flower beds. Viola is also widely used for framing plantings of low, and, if desired, tall trees (even house plants grown on a stem), for framing plantings of tulips, daffodils, daisies, forget-me-nots, muscari and other flowers. Alpine slides also rarely do without pansies.
What is the secret of their success? The fact that, despite the apparent fragility, charming pansies are extremely unpretentious, they easily tolerate a transplant even in a flowering state. They can be planted in the ground in the spring as soon as the snow melts - and then, until late autumn, a variety of pansies will delight you with their flowering.