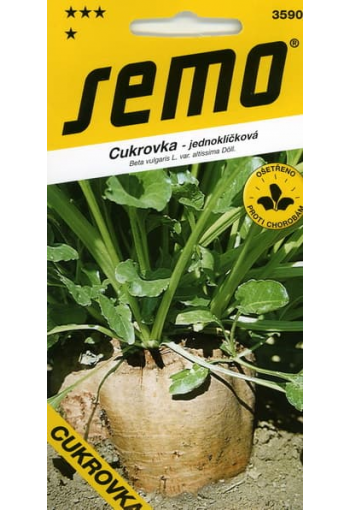 Add to wishlist Add to compare
DescriptionReviews (0)
Sugar beet - Beta vulgaris L. var. altissima.
In the first year, it develops a strong root system, tops and a thick, fleshy root vegetable with a rich supply of sugar and other nutrients.
The sugar beet root crop is white in color and has a regular pivotal shape with a relatively small head, a slowly escaping body, gradually turning into a very long "tail", and the main axis of the root system.
In the first year of life, the beet develops about 60-90 leaves, of which from a quarter to half normally die off.
Seeds and the first true leaves are more important for beet growth and yield than leaves in the second half of the growing season.
This circumstance must be taken into account when cultivating sugar beets, especially when protecting young seedlings from the harmful action of the soil crust and pests.
Signs of a rapid increase in the size of the root crop and the accumulation of sugar are: an increase in the number of leaves on a plant, an increase in the size of leaf blades and a leaf life, equal to an average of 60-70 days.
1 gram = 50-80 seeds. 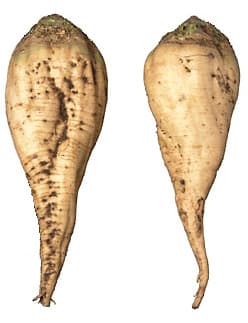 * Sugar beets are very fond of rabbits, chickens and ducks.
It is advisable for everyone who keeps living creatures to grow sugar beets on the plots - they grow many leaves of a huge size (sometimes up to one meter).
The leaf mass of this beet is an excellent pet food.
And if someone wants to make syrup from sugar beet, then they prepare it like this: they wash, peel, chop the beets.
The shavings are poured with cold water, boiled and insisted until they cool completely. The juice is filtered off, excess water is evaporated in a "water bath" until the volume decreases by 4-5 times.
The juice turns into a thick, sweet syrup of dark color (readiness is determined in the same way as for jam - a steady drop on a saucer).
The syrup is poured into sterilized jars and placed in a cool place.
Such syrup is stored for a long time. 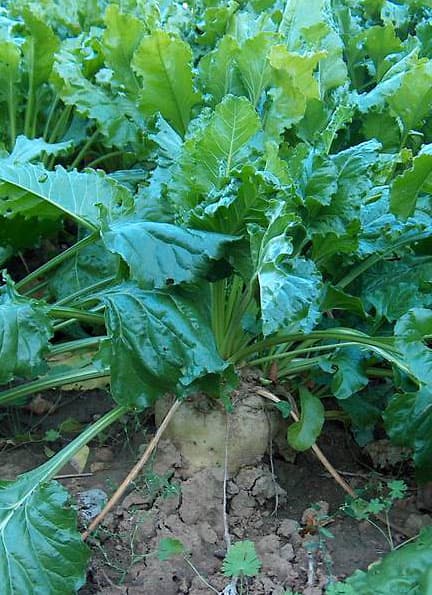 * Beets make our life not only tastier, but also sweeter.
Sugar is obtained from special sugary beets. This process is quite time consuming. In sugar factories, beets are first thoroughly washed and then cut into pieces.
A powerful mixer turns these pieces into a state of mushy mass, which is filled in special bags made of coarse wool. Then they are placed under a press in order to squeeze out the juice, which is further boiled in a boiler until the water is completely evaporated.
When the juice thickens, the sucrose content reaches 85%. After that, the condensed juice is subjected to a rather complicated purification, as a result of which the usual white granulated sugar is obtained.
By the way, Europe owes the emergence of sugar refining from beets to the trade war between England and France at the beginning of the 19th century.
The continental blockade, with the help of which the British tried to strangle Napoleon's regime, doomed the French to a very hard life. In this connection, the supply of sugar from the British colonies, where it was made from sugarcane, was stopped (it was then in France that a large award was announced to those who find a way out of a difficult situation).
Local French sugar made from beetroot soon appeared on the market ...