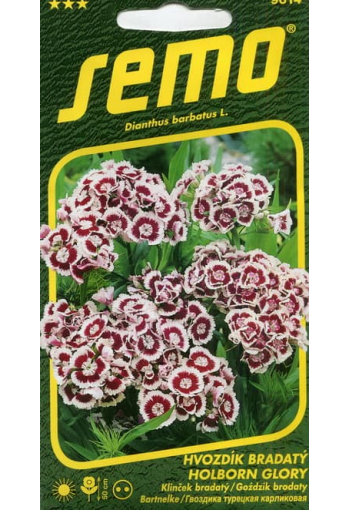 Add to wishlist Add to compare
DescriptionReviews (0)
China Carnation "Hallborn Glory" - Dianthus barbatus.
Unusually attractive variety during the flowering period. The plant is erect, with strong stems and lanceolate leaves.
The flowers are velvety, purple-red, with a white circle, collected in inflorescences up to 20 cm in diameter. Plant height 50-60 cm.
It is cold and frost-resistant, prefers drained non-acidic soil in open sunny places, and tolerates partial shade.
Grow in flowerbeds, borders, balconies and open boxes. In the cut, it retains its decorative qualities for a long time.

* Life cycle: perennial, but grown as a biennial in Estonian conditions.
In the first year, it forms a rosette of leaves, which hibernates, and in the second year, it blooms from the first half of June to the end of July.
Features of the culture: unlike other types of carnation, Turkish carnation is undemanding to light, grows in partial shade, and is cold and frost resistant.
Soil: fertile, non-acidic (pH 5.5-6.2), loamy garden soil. Do not tolerate waterlogging, especially stagnant water.
Seeds: 600-950 pieces per 1 g, remaining viable for at least 4 years (at air humidity 22-30% and temperature +5°C).
Germination: at a temperature of +18+20°C shoots appear in 8-10 days.
Sowing: in late May - early June (the earlier the sowing is checked, the greater the number of large rosettes formed by autumn), in open ground in the sun or in partial shade. Sow in rows every 15 cm; the distance between the seeds in a row is 1-2 cm, and the embedment depth is 1 cm. The crops are lightly sprinkled with earth (vermiculite), sprayed and stretched over them with a non-woven covering material. Plant nutrition area - 20 x 30 cm.
Picking: after 3 weeks, the seedlings dive (the distance between plants in a row is 6 cm, between rows is 15 cm) and again covered with covering material. Picking is best done on cloudy days or in the evening (after 18 hours).
Landing on a permanent place: in the second half of August - early September, seedlings are planted in flower beds or on ridges (for cutting). When the soil begins to freeze, the plants are mulched with peat or humus. For the winter, landings are sheltered from mice.
Care: carnation is responsive to top dressing, the introduction of humus (but fresh manure cannot be applied under it!).
Top dressing with complex fertilizers begins in early spring, when the soil thaws.
Usage: effective borders are obtained from Turkish carnations, it is also suitable for colorful flower beds, alpine slides, for cutting. It can also serve as a groundcover and replace the lawn, grow on retaining walls and between path tiles, frame steps.
Secrets of success: in order to enhance the formation of side shoots, in seedlings at the stage of 4-5 pairs of leaves, pinch the tops of the shoots.