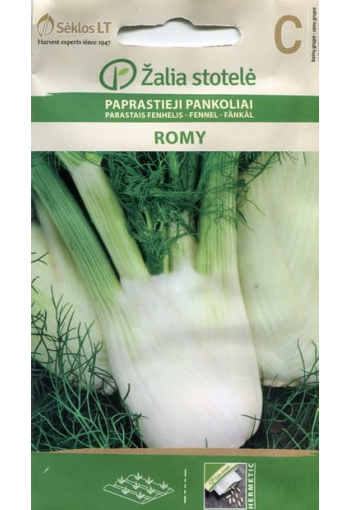 Add to wishlist Add to compare
DescriptionReviews (0)
Fennel "Romy" - Foeniculum vulgare var. azoricum.
Early-maturing variety of Italian dill. Vegetation period: 70-75 days following the sowing. 150-200 cm high. The bulb is round, weights 350-400 g.
Fennels are the closest relatives of dill but the flavour and smell is anise-like. Corms may be used in sallads and soups, they are suitable for stewing, grilling, dried corms or leaves may be used for seasoning dishes. Seeds may be used for flavouring pickled or preserved vegetables.
The latter is grown in order to obtain a thickened part of the stem. Fennel is placed on fertile loamy soils, in open, sunny places. Propagated by seeds. They are sown in mid-May at a depth of 2 cm, according to the scheme 50x40 cm, at the rate of 0.8-1.0 g/m2.
Care consists in thinning, loosening row spacing, top dressing. In vegetable fennel with a thickening of the stem, hilling is carried out. It is cold-resistant, but without snow it can freeze, so in the fall it is covered with manure or humus. During the dry season, this crop requires watering. Harvesting begins when the plants reach a diameter of 10 cm.
1.0 g = 150-270 seeds.

* Even in ancient times, fennel was popular with the Chinese, Indians, Egyptians, Greeks and Romans. Then he was credited with almost miraculous power as a medicinal plant; believed that it helps "from all fevers." Fennel entered Europe in the early Middle Ages with the Romans.
Today, fennel is a valuable spicy, essential oil, vegetable and medicinal crop. It is rich in ascorbic acid, carotene, vitamins B, K and E. The plant contains essential and fatty oils, sugar, mucus, proteins and tannins. Fennel leaves are used to add flavor to fish.
In the Caucasus, it is an indispensable component of national dishes. Italians like to eat them marinated as a separate vegetable dish.
The fruits serve as a baking spice: sprinkled grated on bakery products, for example. Fennel is also added to pickles and other vegetables. And fennel fruits produce vegetable oil used in confectionery and in the production of liqueurs.
Fennel has healing properties.
Preparations obtained from its fruits and oil have an expectorant and antispasmodic effect. Fennel is used for spasms of the gastrointestinal tract, bronchitis with viscous and difficult to separate sputum, a tendency to edema, for rinsing the mouth and throat, as well as increasing milk production in lactating women.
It has a distinct smell of anise and crispy juicy flesh. Everything about fennel is edible - bulb, stem, leaves and seeds. The pinnate leaves and stems of fennel are used as an aromatic herb, the bulb is used as a vegetable, and the dried seeds are used as a condiment for many dishes. Fennel is eaten raw, added to salads, or cooked from it in a fragrant puree soup. Cut into quarters and fried in peanut butter, it makes a good side dish for goose or turkey.
Fennel perfectly stimulates the metabolism.
Chew fennel seeds when you are hungry - you will see that your appetite will immediately decrease. And tea made from fennel leaves or seeds helps to reduce weight (by the way, in the 19th century, fennel was often added to ordinary black tea). It stays fresh for about four days in the refrigerator. However, the sooner you eat it, the better: because the fennel flavor gradually disappears.