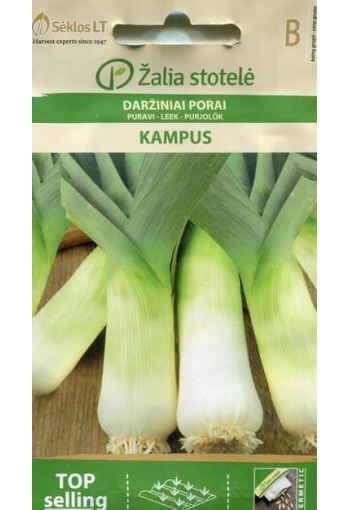 Add to wishlist Add to compare
DescriptionReviews (0)
European leek "Kampus" - Allium porrum L.
A late leek variety for autumn harvest, grows best in a fertile, non-acid clay loam soil.
“KAMPUS” leek should be planted in seedlings, which are grown from mid-March or it s end, can be sowed in autumn. Vegetation period is 150-170 days. Can spend the winter in soil.
The white part of the stalk is large, 15-20 cm long. Suitable for long-term storage. 1g contains approximately 300-320 seeds.

* NEED A LARGE GARDEN LEEK?
Sow it before winter!
Very often gardeners get upset because the leek is small. And it turns out that our Estonian summer is too short for him ...
Therefore, leeks are grown either with the help of seedlings or by sowing seeds in a permanent place - and both methods do not produce large plants (if you also do not fertilize the soil well, you will get a leg of an onion no thicker than a pencil ...) the thickness of the leg of a commercial onion is 1.5-3 cm or more.
How do you get the big leek?
Of all the onions, leeks have a high yield. A large mass of pure product per square meter is very attractive!
Landing and care.
Leeks like neutral soil (pH 6-8) with a lot of humus. It is very easy to grow on black soil, where you only need to constantly water it. In the middle lane it grows worse, although it is very cold-resistant: it develops slowly due to cold temperatures.
The most preferable would be a simple and reliable method of growing large juicy greens, which can also be used for celery with sorrel ("with a early run"): winter sowing in August-September, after which young shoots go under the snow, having a height of only 2 -3 cm ( but in the spring it is not seedlings that start growing into growth, but strong bushes). They are the ones who will create large bushes of leeks that you cannot grow in any other way.
This is very convenient: somewhere in late August or early September, you sow a row of seeds in the vacant place (no digging, only cutting the weeds with a hoe). So that he does not get lost during the autumn preparation of the garden, pull a string over it on two pegs - shoots appear in two weeks.
In autumn, the earth keeps moisture for a long time after watering, so you don't have to worry about seedlings. Because of the cool weather, they develop slowly, they are not covered with weeds too much. You don't even need to thin them out, let them go under the snow in full force.
In early spring, they need to be thinned out, leaving 10-15 cm between the plants, cleaned of weeds - and an excellent harvest is guaranteed, given that such leeks have especially deep roots, which all summer will get to ground moisture and even with moderate watering will create large bushes.

Leeks: the whole plant contains ascorbic acid, as well as potassium, sodium, calcium, magnesium, iron, phosphorus, chlorine, sulfuric and silicic acids, phytoncides and other substances.
Young leek leaves are eaten, but the thickened part of the leg is more often used.
Leeks taste sweet. It is eaten fresh, boiled and dried.
In its effect on the body, it is very close to onions.
Due to the diuretic effect, leeks are used for obesity, kidney stones, gout.