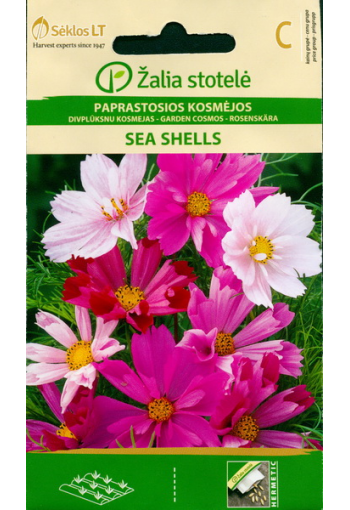 Add to wishlist Add to compare
DescriptionReviews (0)
Garden cosmos "Sea Shells" mixture.
Cold hardy annual.
Plant height 80-120 cm. Flower diameter 8-10 cm.
Popular annual herbaceous plant with lush, intense flowering. Large inflorescences-baskets richly decorate tall, openwork bushes.
Plants are unpretentious, drought-resistant and cold-resistant. They tolerate rain and wind well.
Recommended for growing in large groups in front gardens, near walls, along fences and fences, and in flower beds. Good for cutting.
Sowing seeds in open ground in nests of 3-4 pcs. Seedlings appear in two weeks. When the first two true leaves appear, they are thinned out, leaving no more than two plants in the nest. Watering is needed only at the beginning of growth and during dry periods.
1,0 g = 150 seeds.

* Homeland - the mountainous regions of Mexico.
Herbaceous annual plant. Stems dense, erect, 50-150 cm tall. The leaves are twice pinnately dissected into filamentous lobes, which gives the whole plant an openwork appearance.
Inflorescences are large, 7-10 cm in diameter, solitary or collected in a rare corymb. Marginal flowers red, white, pink, red or purple, tridentate at the top, arranged in one or more rows; tubular - small, yellow, form a small disk. Blooms profusely from mid-June to September. Seeds ripen well and remain viable for 3-5 years. Gives abundant self-seeding.
In culture since 1799.
This type of cosmea is one of the most common annual plants decorating flower beds. True, some gardeners believe that kosmea does not look refined enough - it has too large inflorescences that have too bright, flashy colouring. However, as a result of targeted breeding work, varieties with small inflorescences and a more modest colour scheme have now appeared, so the plant can be selected for every taste. Those who like lush, intense flowering have appreciated cosmea for a very long time. Cosmeus is good to plant in the background of the border. The background formed by its finely dissected feathery leaves and numerous inflorescences looks very informal.
Location: photophilous plants, cold-resistant.
Soil: undemanding to the soil, but grow better on loose and rich in nutrients.
Care: timely and regular watering, withered inflorescences are immediately removed - this stimulates the formation of new buds. Tall varieties are tied to stakes driven into the soil. On nutrient-rich soils, feed every 6-8, and on poor soils every 3-4 weeks with a solution of complete mineral fertilizer.
Reproduction: seeds.
Sowing is done in April in open ground or cold greenhouses. Seedlings are sown from March to mid-April. Only press the seeds into the substrate without sprinkling soil on top, as they need light to germinate. At a temperature of +15+18°C shoots appear in 1-2 weeks. Seedlings are planted in place in May at a distance of 30-35 cm. Transplantation is well tolerated.
Use: recommended for large groups near fences and walls, rarely for cutting.
Partners: combined with variegated letniki, suitable for colors (vervain, Turkish carnation, phlox), also with chamomile, marigolds and dimorphoteca. A good silvery-white duet of a two-year-old giant cynomolgus and a white-flowered cosmos.