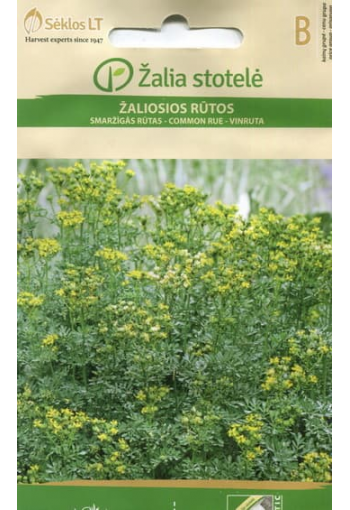 Add to wishlist Add to compare
DescriptionReviews (0)
Garden Rue - Ruta graveolens.
Perennial medicinal and spice plant 60-80 cm high.
Used as a seasoning for meat dishes and for pickling mushrooms. It is widely used in folk medicine as an anesthetic.
Due to the fact that the plant contains rutin, it is not recommended for children and the elderly.

* The Latin name Ruta graveolens is translated as "fragrant rue", since the smell of rue is specific, rather sharp and strong.
Some consider it hard and unpleasant, others - piquant. But the most interesting thing is that the smell of dried rue changes dramatically and it acquires a delicate scent of roses.
Its other essential property is its toxicity. It is impossible to use pyty in large quantities either for medicinal or culinary purposes - it is dangerous!
In small doses, it acts as a medicine and antidote.
There is a story about the Pontic king Mithridad VI Eupator (132 - 63 BC), who, fearing being poisoned, took a tincture of rue every day. And when, having lost the battle, he wished to be poisoned, he could not - the body developed a strong immunity to poisons.
In folk medicine, rue is still used as an antidote for snake and insect bites. It is believed that where this herb grows, poisonous snakes are not found. And if you put the root in the room, then mosquitoes and flies will fly away.
Another disadvantage of this herb, which becomes a virtue when skillfully handled, is pungency. On a hot sunny day, especially in the south, it is better not to touch the rue leaves - they can burn. But at the same time, fresh rue juice successfully heals old wounds and conjunctivitis.
As a remedy, ruta is also used in official medicine and homeopathy. By the way, rutin (an organic compound with vitamin activity and strengthening the capillary walls) was originally isolated from ruta.
Ruta has an antiseptic effect, it is used as an antispasmodic, tonic, tonic and anti-inflammatory agent.
There is only one absolute contraindication for this herb: rue should in no case be used by pregnant women. And, of course, it can only be treated under the supervision of specialists.
As a spice, rue also needs to be used carefully.
In Mediterranean cuisine, its fresh, and more often dry leaves are added to salads, meat, fish and vegetable dishes, to fillings for pies, to tea; wine and vinegar are infused on it.
In addition to all its useful qualities, it is also decorative and may well serve as a garden decoration. This low (up to 60 cm) evergreen perennial semi-shrub blooms from late June to early autumn. But the most beautiful are its delicate gray-green leaves.
Ruta can be successfully used in mixborders and borders - it is easy to cut and shape.
In sunny, wind-protected places, rue grows on almost any soil: rocky and sandy, poor and fertile. He only dislikes excess organic matter, stagnant water and high acidity.
Under the cover of snow, this southerner easily overwinters in Estonia. And if in a frosty winter its upper shoots freeze, then in the spring they are simply cut off - and they begin to grow again. Even a completely frozen aerial part of the plant will resume thanks to its powerful root.
Ruta is propagated by seeds or cuttings. You can sow directly into the ground - at the end of May, when the soil warms up enough. Ruta blooms in the second year.
Collect the leaves of the rue at the beginning of flowering (so as not to burn yourself, it is better to do all work with this plant with gloves).